This game provides an interactive gameplay. Most of all, it lets you experience multiplayer shooting as you may have already experienced with Counter-Strike and similar games. It offers a good graphics quality as well.

However, the interface could be better, but it works smooth enough. It doesn’t need a whole bunch of storage space to work, it just needs around 100 MB of free storage to work well.

Do you love “Battlefield” game series for PC? Well then, you should not miss playing this one. You would find yourself on the battlefield between the rebels and the Black Ops team. There is no room for the weak here, only strong commanders, elite soldiers and expert snipers can survive the scene. You need to defeat the rebels before they succeed killing most of the Black Ops soldiers. 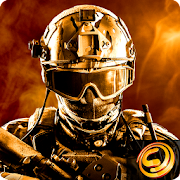 This is so far one of the best shooting game titles for Android. It is one hell of a shooting game. The graphics quality proves to be very rich in details.

Unfortunately, the game requires demanding specifications in order to work smooth. In our case, it worked superbly with the Snapdragon 615 powered Moto X Play. So, you can do the math about its performance on your device. The game presents a compelling story line which keeps you stick to the game. Powerful weapons available for combat, just be clever to choose the right one and keep upgrading them.

It’s one of the ultimate shooting games one would want to have installed. The game offers amazing graphics and beautiful locations. You will probably fall in love after checking out the weapon upgradations offer. You can deploy troops in order to protect your basement while you capture other player’s loot. Endless enemies to kill and it is damn addictive!

The multiplayer experience is interactive as well. You should give it a try and start killing bad guys!

Have you already played them all? Want us to add another deserving game to our list? Let us know through the comments section below.