Google is among the manufactures that are mostly into developing the software and not into actually going forward and manufacturing tons of different devices in the year. Every year they are coming with two different devices which Google started with Nexus 6p and Nexus 5x series and later they put an end to Nexus and started with their own Pixel lineup.

Google comes with the front and rear end of the phone being glass, while the rest of the phone is actually an aluminum frame. On the back, we have a big camera unit which is positioned on the top left corner of the device. Yes, Google has chosen to use a single camera lens this year too when everyone is going with 2 or 3 camera lens attached to the phone.

On the front to Google is using large bezels both on the top and the bottom which is a quite old look to the phone. The rear glass of the phone is frosted which surely picks up a lot of smudges and other things which make sure that the rear will not be looking great for long unless you use a good quality case over it.

Talking about the choice of materials they are quite good as the frame is made with aluminum while the rest of the phone i.e. the front and the back is covered with Glass which is the top of the line glass unit from Corning the Gorilla Glass 5.

This makes sure that there are not many scratches and for most of the time we are going to save the phone from nominal drops and another kind of scratches. The phone is on the heavier side and does feel a bit of overweight, even the overall design of the device doesn’t feel premium although it is the in-hand feel which does due to the frosted glass at the back.

Google has loaded the all-new Google Pixel 3 with a POLED display which is mostly found on the LG top of the line devices. This one happens to be a 5.5 inched screen unit and is surely one of the best in colors and producing the right color each time from the 16 million different color gamuts this particular display is capable of showing.

Talking about the screen to body ratio of the phone this is quite low at 77.2% which is surely low as for the 2018 standards. The display is having a resolution of 1080 x 2160 pixels and comes in an 18:9 aspect ratio which is again a bit of old as per the 2018 standards.

The display is plugged in with Always on technology and also comes with 100% DCI P3 coverage which is again a great part for the all-new Google Pixel 3 but at the end of the day when we are having a display with HDR 10 Compliancy and this one just staying at HDR then the device does feel old.

Pixel 3 display is highly capable one and can easily produce the best of the images and the best of the colors without any issue. Keeping the display quality in mind we can say that you can easily enjoy any movie with your family on this phone.

Google Pixel 3 comes with the top of the line chipset from Qualcomm the Snapdragon 845 which is one of the best in terms of performance and happens to be a great unit for doing any kind of gaming or any kind of process hungry task.

Handling the GPU tasks is the Adreno 630, which is the best for doing any kind of graphics task on the phone. The phone comes with 4GB of RAM option which makes it super easy for us to multitask. If you feel by flagship standards the RAM is quite less then it is quite true because the standards have gone up to 8GB and plus 2GB is coming soon.

Hence we can say that 4GB is less but as it is coming straight from the headquarters of Google then we can easily claim that software optimization of the phone is going to be the best.

In real world situations it is quite clear that Google Pixel 3 is giving the best in performance, as the main thing here is about the RAM and that is quite efficiently controlled, the system enables the device to hold up to 6 applications in memory without any problem, even the games can actually exit and then resume after opening over 3 apps, hence the optimization is at the right point.

Coming to the gaming and other things on the mobile phone then also it excels in the major part, and we can experience the great in class performance without any issue with the help of the Google Pixel 3. Day to day work on the mobile phone is quite great and we can say that this phone is made to entertain people of each and every category.

Google hasn’t yet got the taste of the dual camera setup even in 2018. Hence this device comes with just a single unit at the back of the phone which is a 12.2 MP unit coming with an aperture value of f/1.8 and it is a wide angle one at 28mm.

This particular sensor comes with Optical Image Stabilisation. On the front Google have used two different sensors both of which are 8MP wherein one is having f/1.8 aperture while the ultra wide one at 19mm comes with f/2.2 aperture. The primary lens at the front has the same 28mm wide angle lens.

Images from the phone come quite great, and it is the AI that the phone is using to do the colors, saturation, and other components of the phone. The major thing here is the bokeh mode which works extremely well and much better than the devices which have two different lenses, and all this is possible due to the software and AI features of the Google Pixel 3.

If you are taking the Google Pixel 3 for image capturing then this is one of the best phones to capture the images.

Google have used software optimization instead of hardware hence here also we get the 2915 mAh Battery which is quite small to keep the phone light and aesthetically good. Still, there is no battery issue the phone is capable of being powered up from morning 7 to 2 in the night if you are using the phone for occasional media, occasional games, and go through calls.

If you are a constant gamer then the device will last for around 4 – 5 hours depending on the game. The phone comes with a 19W charger and can be charged easily in approx 1hr and 45 mins.

Google have made an interesting hardware and really well-optimized software to run on the hardware. Named the device as Google Pixel 3, hence it is quite clear that the device is one of the best in terms of performance, camera, battery life, and even build quality which is one of the best, and unique too in terms of design. What do you think about the all-new Google Pixel 3? Do let us know your thoughts in the comment section below. 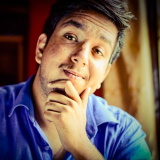