COC (Clash of Clans) is a very popular strategy game available for Android and iOS. For past few years, Kids, Students, Housewives, Business people, and even professionals become addicted to the game. According to the reports, Clash of Clans is installed more than 10 Million active users from the Android itself. The game is available for almost all mobile platforms, and many people are aware of the gameplay. The strategy games are very addictive, and when you are talking about kingdom building games, COC comes first in the list. The game holds the users with addictive gameplay; players need to build the city with resource planning and protection against invading clans. Managing and training troops and arranging them for the defense and combat is the main attraction.

There are a number of apps like Clash of Clans available in the App markets. But it is very hard to find the real and better than Clash of Clans alternative in the ocean of games.

What’s New In The Latest Version of COC

If you are already played the game and looking for the clash of clans similar games or the best clash of clans alternative, this article will help you to find the best game.

Here are the Top 5 COC Like Games that will make you addicted to their strategical gameplay.

It is one of the top 10 strategy games around the world and has 4.5 Star rating from 1,542,198 users. The app is developed by Top Developer IGG.com. The COL 2 offers in-app purchases like COC to buy army, and goods. The gameplay involves twists and turns like COC and very addictive when you are into the base. You have to recruit troops and make them to a combat warriors to save your kingdom from invaders. I can say COL 2 is the best clash of clans clone.

Boom Beach is developed by the same COC developing company Supercell. The concept of the gameplay is much similar to the COC but in a modern way. The story starts in a modern island background; the player needs to attack enemy bases to free enslaved islanders from the invaders. Like COC, Boom Beach has attracted many players with its simple graphics and attractive gameplay. The player will have hundreds of enemy bases to loot and build their modern kingdom. If you are bored with COC old kingdom style, Boom Beach is a new try for you.

#3. Battle Dragons – An Empire of Dragons

As the name itself suggests, dragons are the main attraction of this COC like game with similarities in both strategy and gameplay. Users will have access to nearly 10 different types of dragons that can be raised, trained and used in the battle. Users can upgrade dragons by spending resources that will unlock more unique abilities to the warriors. The resources could be earned like in clash of clans by looting the enemy bases. 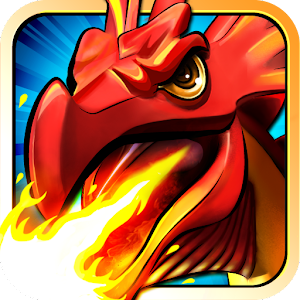 If you are a Call of Duty fan, you might love this COC alternative also. For a change, this one is a strategy game other than the normal first person shooters. You could build your own bases and prepare the defense to defend attacks from the enemies. As much you spend time on this, that much you could upgrade your weapons and base to be more dominant on the game.

Jungle Heat is very similar to clash of clans not only the interface but also the strategic gameplay too. Like clash of clans, you will be able to build your own empire and defend it from the enemies. There are replacements for the COC Gold, COC Elixir and COC Trophies on the game with different other resources. All other functions like Training troops, Upgrading army, and Looting resources are also there in the Jungle Heat. This online strategy game is way much likely as COC but luckily don’t have those Barbarians. 😉